Yellen, in speech Friday, could send signal about next hike 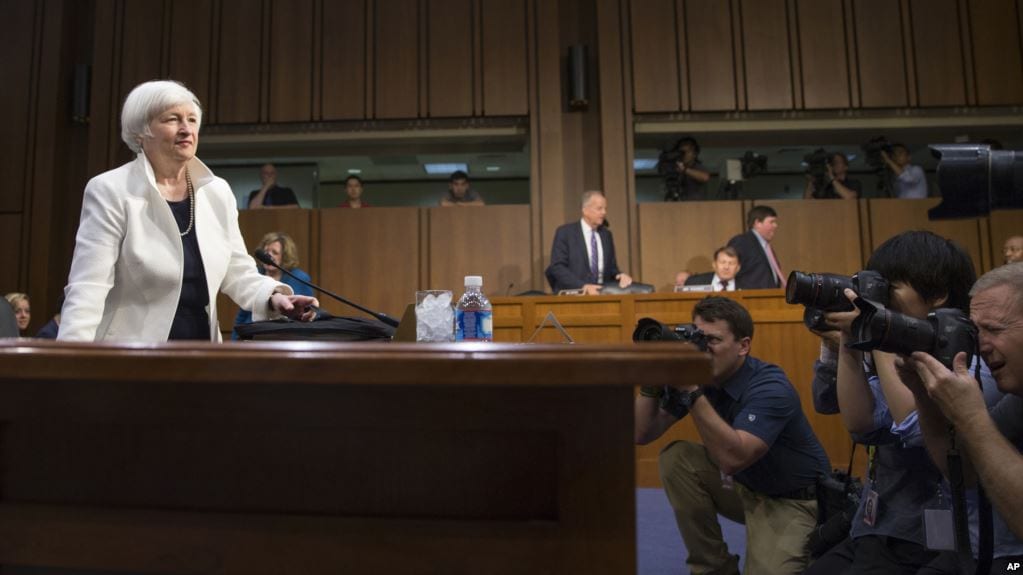 WASHINGTON (AP) — The job market is humming, and so are the U.S. financial markets, with major stock indexes near record highs.

All that would normally trigger a green light for the Federal Reserve to raise interest rates — especially when they’re barely above all-time lows. Yet the Fed, still casting a wary eye on the economy, has yet to signal that it will resume raising rates soon.

That signal, though, could come as soon as Friday, when Fed Chair Janet Yellen will address the annual meeting of the world’s central bankers in Jackson Hole, Wyoming.

Fed leaders have sometimes used the Jackson Hole event to announce major policy shifts. In 2010, for example, Chairman Ben Bernanke signaled that the Fed was considering a new round of bond purchases to try to help a struggling economy emerge from the wreckage of the Great Recession. The Fed’s purchases were intended to shrink long-term loan rates to spur borrowing and spending.

Some economists say they think conditions are ripe for Yellen to alert investors that the central bank may be inclined to act at its next policy meeting Sept. 20-21 — especially in light of recent remarks from other Fed officials.

Two close Yellen allies — William Dudley, president of the Federal Reserve Bank of New York, and Stanley Fischer, the Fed’s vice chairman — have suggested in the past week that a strengthening economy will soon warrant a resumption of the rate hikes the Fed began in December. That was when it raised its benchmark lending rate from near zero, where it had been since the depths of the financial crisis in 2008.

“We’re edging closer towards the point in time where it’ll be appropriate to raise interest rates further,” Dudley said in an interview with Fox Business Network.

And in a speech, Fischer offered an upbeat economic view, saying, “We are close to our targets.” Fischer added that, apart from volatile energy and food prices, chronically low inflation is now “within hailing distance” of the Fed’s 2 percent target.

Sung Won Sohn, an economics professor at California State University, Channel Islands, interpreted the officials’ comments to suggest that support is growing among Yellen and others on the Fed’s policymaking board for another rate increase as early as next month.

“The probability of a hike at the September meeting has gone up and will go up more after Yellen speaks,” Sohn said.

David Jones, chief economist at DMJ Advisors, agreed that the chances of a September rate hike are rising, especially if forthcoming economic data, including next week’s jobs report for August, show strength.
But other economists say they think December remains a more likely time for a resumption of rate increases. And some say that if the Fed does decide to act in September, it would need to further prepare investors. According to data from the CME Group, investors foresee only about a 24 percent probability of a rate hike in September and only about a 56 percent chance by December.

Diane Swonk, chief economist at DS Economics, suggested that one reason U.S. stock averages established highs so soon after Britain’s June vote to leave the European Union escalated global economic fears is the belief among many that the Fed will leave rates alone until perhaps year’s end.

“Investors are not pricing in a Fed tightening,” Swonk said. “We still have uncertainty coming from abroad, and there are a lot of land mines out there. I think Yellen will want to keep her options open in her Jackson Hole speech.”

Yellen is the lead-off speaker Friday for an annual conference attended by members of the Fed’s board of governors in Washington, officials from the Fed’s 12 regional banks and monetary leaders from around the world.

The conference’s theme is “Designing Resilient Monetary Policy Frameworks for the Future,” and Yellen may address whether the global economy has become trapped in a slump of low growth and low inflation and, if so, how central banks might respond.

John Williams, president of the Fed’s San Francisco regional bank, has suggested that the Fed might need to consider raising its 2 percent inflation target to provide more leeway for its efforts to accelerate growth.

Mark Zandi, chief economist for Moody’s Analytics, explained the idea this way: “We lost a lot of ground during the Great Recession, so maybe it makes sense to run the economy on the hot side for a while.”

Still, Zandi and other analysts say the Fed seems far from making any major policy changes given the time it would take to build a consensus.

Before the formal conference got underway, a group of Fed officials led by Esther George, head of the Kansas City Fed, met with about 100 activists with the Fed Up coalition, which is seeking to change how the Fed’s regional banks operate and how they choose their top officials.

The activists, many wearing green t-shirts with the slogan, “We Need a People’s Fed,” presented their case to keep interest rates low until more low-income communities feel the benefits of the current expansion. The group is also campaigning to expand opportunities for minority groups to have representation on the boards of the Fed’s 12 regional banks.

“We asked the Fed presidents to keep distressed communities in mind when they make their interest-rate decisions,” said Dan Crawford, a spokesman the liberal Economic Policy Institute, one of the organizations in the coalition. “Residents from communities who have not seen the full effects of the recovery talked about their experiences.”