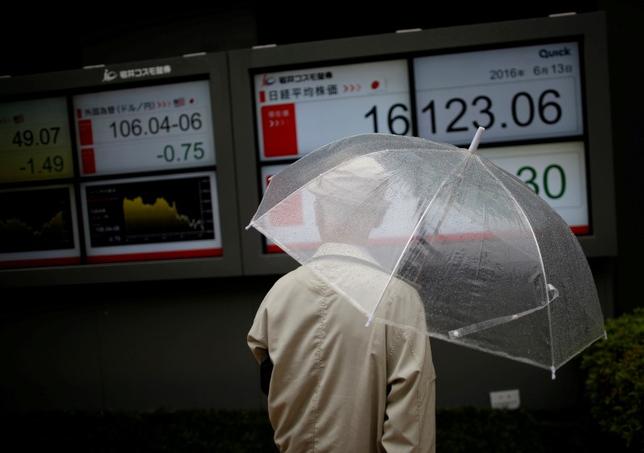 A man looks at an electronic board showing the recent exchange rate between Japanese yen against the U.S. dollar and Japan’s Nikkei average (R) outside a brokerage in Tokyo, Japan, June 13, 2016.
REUTERS/ISSEI KATO

Asian shares slipped after touching a near one-year peak on Friday and the yen strengthened as the Bank of Japan’s fresh stimulus measures disappointed markets, although Japanese stocks recovered on higher purchases of exchange-traded funds.

European markets are set to be positive, with futures pointing to a flat start for Britain’s FTSE 100 .FTSE, and higher opens for Germany’s DAX .GDAXI and France’s CAC 40.FCHI.

The BOJ doubled purchases of ETFs, but maintained its base money target at 80 trillion yen ($775 billion) and the pace of purchases of other assets, including Japanese government bonds.

The central bank also held at 0.1 percent the interest it charges to a portion of excess reserves financial institutions leave with the central bank, while saying it would thoroughly assess the effects of negative interest rates and its asset buying program.

“The fact that the Bank of Japan eased policy is acknowledged, but it was just ETF buying, and the overall impression was that it was not enough and investors were disappointed,” Takuya Takahashi, a strategist at Daiwa Securities, said.

“ETF buying has a direct positive impact on the stock market but its decision to hold off bond buying hit the dollar-yen.”

Japan’s Nikkei .N225, which swung between gains and losses after the announcement, recovered to trade up 0.6 percent.

The index, which touched a seven-week high last week, was on track for a 0.4 percent weekly drop, but a gain for July of 6.4 percent.

The dollar weakened 1.5 percent to 103.67 yen, its biggest one-day decline since June 24, after the UK’s decision to leave the European Union.

Before the BOJ’s decision, many investors warned of a big chance of disappointment because markets have long expected more stimulus, making it difficult for BOJ Governor Haruhiko Kuroda to spring a surprise.

MSCI’s broadest index of Asia-Pacific shares outside Japan .MIAPJ0000PUS pulled back 0.4 percent after hitting the highest level since Aug. 11, leaving it on track for gains of 0.9 percent for the week, and 5.4 percent for the month.

European shares .FTEU3 fell on Thursday, as markets awaited the release of the stress test results on European banks on Friday night.

Elsewhere in markets, oil prices fell to fresh three-month lows, with U.S. benchmark now down more than 20 percent from this year’s peak on growing worries that the world might be pumping more crude than needed.

“Investors have become overly bearish on oil as U.S. production and gasoline inventories continue to rise. We think those concerns are unwarranted. Underlying demand in the U.S. remains robust,” ANZ bank said.